The Lasertag Project team was created by and first led by Joey Kroeger, the club’s head of R&D, in Fall 2017. Before joining, I had barely known anything about drones, let alone built a quadcopter. But joining the lasertag team cemented my interest in UAVs and during this first semester we laid the groundwork for future semesters. By Spring 2017, Joey had to leave the team, so he asked me to take his place as team lead. Although I was new to the world of drones, it was a great opportunity to learn a broad array of engineering skills as well as management skills. We had our fair share of challenges but in the end I believe all three of us became better engineers because of it. The project tested our technical knowledge and forced us to come up with creative solutions while under the pressure of an imminent deadline. Lastly, I couldn’t have asked for a better environment to pursue this project. UAVs@Berkeley has such a welcoming and friendly atmosphere that makes it easy for new members to ask questions and get help from more senior members. The collaborative and welcoming environment at UAVs@Berkeley, helped make this project happen.

FPV (first person view) drone racing is a phenomenon that has been growing enormously in the RC aircraft hobby for about 2 years. A small, acrobatic, and extremely overpowered quadcopter is piloted manually via a first-person view camera feed transmitted to a pair of video goggles that the pilot wears. This allows for total immersion and for the pilot to feel as if he or she is in the cockpit. The fun that can be had with these small aircraft is limitless, and one natural extension to the acrobatic flying that FPV pilots partake in is to simulate a dogfight of sorts. The “FPV Laser-Tag” will be working to create a working game of laser tag to be played on FPV racing drones to simulate an intense drone dogfight.

FPV Laser-Tag is a game in which two FPV racing quadcopters are outfitted with infrared sensors and transmitters to play a basic game of laser tag. Each quadcopter has two sensors mounted on the back, and one laser cannon on the front. An on board Arduino Nano handles all of the game mechanics. Whenever the player gets hit, or fires, the piezoelectric buzzers make a noise. The drones currently have automatic firing, but there is a cooldown mechanic currently implemented that can work with manual firing. When the cannon has been firing too long, the cannon will ‘overheat’ and become ‘disabled’. After the gun has cooled down, the player can resume firing. When a player’s Hit Points go to zero, the player loses, their cannon stops firing, and the game is over.

The initially, we worked on the quadcopters and the firing and sensing system in parallel, since we had to design the layout of the quadcopters to account for the whole laser-tag system.With our laser tag system, we first created a prototype system on breadboards in Supernode. We first tested each circuit separately, then tested the whole breadboard system with some basic arduino code. After we made our sensor circuit PCBs, we tested a more complex firing system with the system attached to the drones. Once we had the first iterations of these systems, we then moved on to working on the OSD. All CAD was done through Autodesk Fusion 360, and all of our custom components designed on Fusion 360 were 3D-printed with the printer in 107 McLaughlan. Our circuit boards were designed with Altium, by UAVs@Berkeley member James Dunn.

Prototyping our hardware was done through interactions of CAD models on Autodesk Fusion 360 and 3D printing. We used PLA when creating prototypes of hardware, but we used TPU in the final versions. Our software for the laser-tag system and the game was done iteratively, starting with the most basic breadboard implementation and then working our way up. 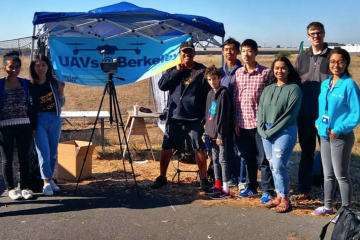